Once the physical assets in the building are described and entered into the spreadsheet, it can be sent to an email address where it is then automatically loaded and configured in the HERO database. HERO is an online database into which the iSERVcmb spreadsheet data can be input, along with on-going consumption data, to produce targeted energy benchmark reports for buildings, HVAC systems and HVAC components.

Once loaded, a set of reports can be produced which are tailored to the building, systems and activities described. If no data is provided then only an overview report is produced for the building and systems.
As the database receives data regularly from many buildings, meters and sensors, it can produce regularly up-dated reports which are benchmarked against this latest data. The benchmarks derived from this real consumption data can be presented by system, component, space and activity.

For a particular building, plotting the actual metered consumption over the tailored benchmark ranges immediately conveys how well the building, system or component is performing. A major strength of this approach is that, as the benchmark ranges are derived from operational data from other users servicing the same end use activities, this is shown to be persuasive in getting end users to act on the information provided. 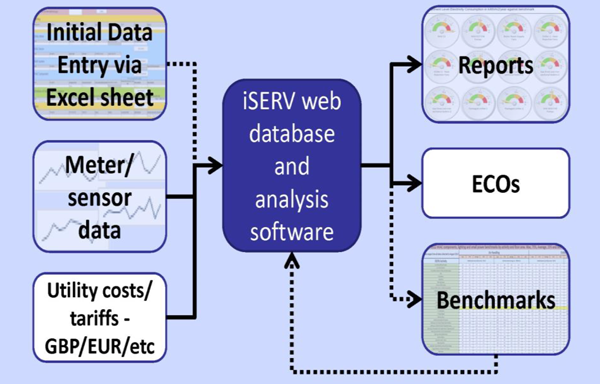 The provision of HVAC component technical specifications is required to allow some ECOs to be triggered and included in the HERO reports.

The diagram in Figure 3 shows the major components of the iSERVcmb process as they relate to the HERO database. These are further described below.

The HERO database allows for either the automated loading of data via email attachments or manual entry via the online user interface. Its data cleansing function proved central to the provision of high quality data for the project as the data supplied from around Europe was of a variable quality.

The HERO Reporting Module allows users to log into the HERO website and configure sets of standard reports which can be automatically emailed out in a series of formats such as Excel, Word, PDF and HTML. Users are also able to produce individual reports on demand from the HERO library of reports. The HERO Reporting Module was configured during the project to automatically generate 2 standard reports per building on a monthly basis. The first is a high level report that shows a summary of the building, its consumption and any potential savings that can be made. The second report is more detailed and shows a breakdown at the services level for the building along with heat maps at meter level where sub-hourly data is available.

The report in Figure 4 is central to the iSERVcmb project. It shows tailored benchmark ranges derived from the building, services and activities description for the iSERVcmb McKenzie House Case Study. The buildings’ measured Rolling Annual Consumption per m2 for the building is overlaid in the blue columns. Rolling Annual Consumption is one year’s data summed up to the end of the month shown. The Dec 2006 consumption would therefore be the aggregation of the 12 months Jan 06 – Dec 06.

If the consumption is in the red band, iSERVcmb proposes that the building “Needs Checking”, the amber band suggests “Average” utility usage and the green band is “Good”. It can be seen that this building has significantly improved its performance since December 2006 and is now performing at a “Good” level ac-cording to iSERVcmb. Similar reports are produced at HVAC System and Sub-component level. 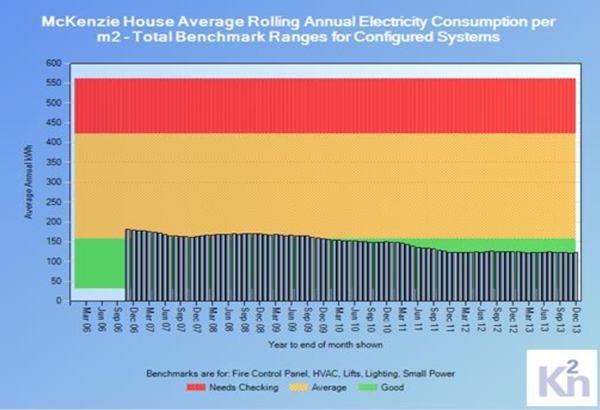